Fat metabolism is so complex that only real scientists can actually follow it so for this we will look mostly at conclusions. It is well established that saturated fat contributes to inflammation in the liver so for this we'll take that as a given. The goal for a liver patient is to stop the inflammatory process as it is the root mechanism of cirrhosis. It doesn't usually matter how your liver got damaged, when you get to cirrhosis it is the formation of scar tissue or fibrosis that is a critical enemy for you. 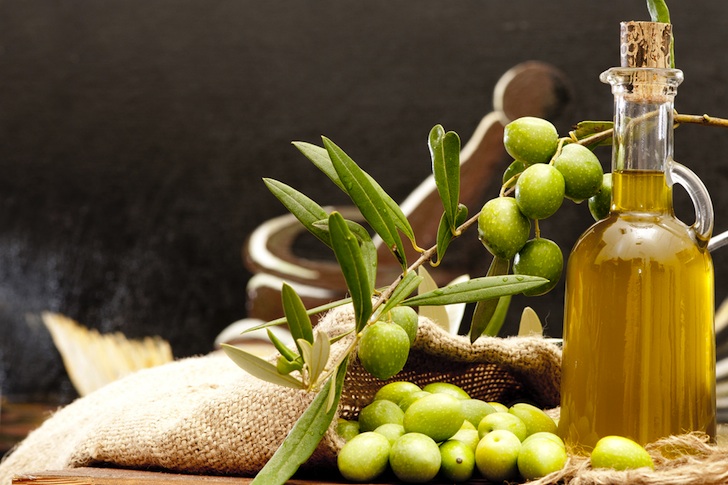 Olive oil is mostly oleic acid which is actually the fatty acid omega 9. Like most fatty acids it is in the form of a triglyceride. We tend to have a negative view of triglycerides because of stories about the harm that they may cause. Much of this negativity is misplaced because of a lack of understanding of fats.  Triglycerides are the key energy storage molecule for the body. Triglycerides can't pass through the cell wall of the bowel so they are broken apart there and the pieces are moved inside the cell then used within the cells of the bowel to build new triglyceride molecules.  Those don't go to the liver but are packaged with other molecules and travel through the lymph system so that they bypass the liver initially and can be used directly by the body. If they do arrive at the liver it may use them to store as fat deposits or process them into other chemicals that the body needs. It sends surplus to be stored in the fat cells unless the transport molecules are overwhelmed and then the fat stays in the liver becoming a fatty liver or they become the source of other negative processes. The liver also signals the fat cells to release the fatty acid when the body needs energy. The intense fatigue you may feel suggests an inability of the liver/fat cell process to deliver enough energy to your body.

In addition to its role as an energy carrier, oleic acid or the fatty acid omega 9, is also active in the energy conversion process of the cell. It stimulates the complete oxidation of various fatty acids thus improving the energy available to the body. That also means that the cell has fewer byproducts to process and in general a lower tendency to promote inflammation. Here's a link that explains that.

Within the liver, the key cell that drives inflammation is called the "stellate" cell. When activated it exudes material between the liver cells which ultimately calls in platelets and repair processes which leave scar tissue or fibrosis. Although not fully understood, oleic acid is supportive of the stellate cells and cools the activation response thereby reducing inflammation.

There are other aspects to fatty acid metabolism but these two are sufficient to convince me that relying on extra virgin olive oil is beneficial to my overall health and it specifically supports my liver in fighting inflammation and advancing fibrosis. That explains my diet recommendations which seek to eliminate as much saturated fat as possible and provides abundant oleic acid daily.

To understand this we have to think about bio-chemistry and a little bit about molecules. Fats are the main energy storage molecules the body uses in the form of what we call triglycerides. A fat is basically a chain of carbon atoms which can be of various lengths. It is like a string of beads and in its simplest form is called unsaturated. Hydrogen atoms can be attached to the carbon atoms so if a few are added the fat is partially saturated but if all of the spaces have hydrogen atoms the molecule is saturated. To understand why that might matter think back to the string of beads image and imagine a second string attached beside it to form a doubled strand.

Since the body can use any of the fat forms why does that matter? Since an unsaturated fat has more unused carbon atoms it can participate in a wider variety of chemical reactions which, from the liver's perspective, means there are more ways that it can process those molecules. Liver chemistry is maddeningly complex, but In simple terms an unsaturated fat is supportive of liver health and a saturated fat not so much. 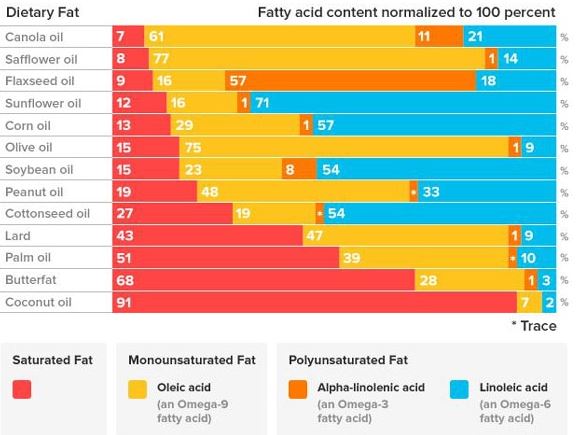 Beyond the chemistry there is a structural difference to consider. Because a saturated molecule is bulkier and stiffer, that is not as flexible, it matters to an as yet unknown degree when the molecule is used to build tissues. When saturated molecules are incorporated in cell walls, they tend to clump together so the cell is less flexible than it would be if made only with unsaturated molecules. Conceptually that can affect the way cells operate. We still have a lot to learn but I accept the idea that more flexible is better.

Remember, the liver cells regenerate quickly so if any new cells your body builds are in any way better that improves your situation so I advocate providing plenty of unsaturated molecules to support those processes.

Now let's take a look at the omega 6 / omega 3 ratio. I am an advocate for the use of abundant omega 9 found in olive oil because I base the care of my cirrhotic liver on what I ask it to do. I am a "Be Kind to Your Liver" guy so I have to pay attention to the actual bio-chemistry I want to support. Let's look at the two "essential" fatty acids, omega 6 and 3.

The essential fatty acids are called that because they can't be synthesized by the body and must come from the diet. Therefore the proper question is how much of each is good for me and is there an amount that is harmful? The answer to that comes from nutritional research. Looking at human diets over time, we estimate that as hunter gatherers humans probably had a diet that ranged between one to one up to four to one omega 6 to omega 3. In simple terms, more 6 than 3 but not an overwhelming difference.

In our modern society things have changed. Some research suggests that our industrial diet may have an omega ratio as high as 50 to 1. The fat balance in our diets has changed dramatically in the past two generations and mirrors the obesity epidemic raging in our society.

The fat processes themselves are a hazard to liver health but is there more to the story? Generally the fat discussion is between saturated and unsaturated fats, but that ignores the question of whether all unsaturated fats are beneficial. Sadly, it is not that simple so lets take a look.

The bio-chemistry of fatty acids in the liver is very complex and far beyond this short piece, but there is one step in a long chain of chemical reactions that is critical to liver patients. In fibrotic disease like cirrhosis inflammation and the formation of scar tissue are fundamental. In that complex process one class of chemicals is quite important. Those are the eicosanoids. These chemicals participate in the inflammatory process by encouraging or promoting inflammation.

The thing to understand is that both omega 6 and 3 fatty acids can be converted to eicosinoids. That is important to the unsaturated fat debate because both corn and soybean oil are rich in omega 6 while olive oil is primarily omega 9. As our industrial food system uses more and more corn and soybean oil it is easy to see why our omega ratio has become one sided.

So, is there a difference between 6 and 3? Fortunately there is. Both forms of fatty acid can be made into eicosinoids but it is important to know that the omega 3 version is less inflammatory than the omega 6. If more of your eicosinoids are made from omega 3 you will have a more moderate inflammatory response and less liver damage. This is what leads to the dietary recommendation to eat fatty fish like salmon as that is the best source of omega 3.

My personal strategy is to use olive oil for most of my dietary fat and I use refined salmon oil daily to make sure that I push the omega 6/3 ratio lower. I also try to eat fish regularly but that is a challenge so I supplement.

If Fatty Liver disease or its cousins concern you, join the Foundation, its free

As a practical matter you can't get that much olive oil in cooking. Personally I just view it like cough syrup and take 4 table spoons daily plus whatever I get with food. Be sure to pay attention to the source of the oil. UC Davis found that 69% of supermarket oil wasn't really extra virgin. A little factoid, Italian law allows any oil that comes through the country to be labeled as Italian no matter its source. Bertolli, the biggest Italian distributor in the US doesn't own a single olive tree. Until recently most olive oil sold here was vegetable oil doctored to look like olive oil. Here are a couple of links to info.

For those who shop on line here is a link to sites that carry certified olive oils.

Where you can buy certified oil online

A cautionary tale. Bulk oil is shipped in large plastic bags called whales. A US packer once received a shipment which the staff thought smelled funny. When it was tested it had 390,000 times the allowed concentration of an insecticide banned in the US. It turns out that every port sprays the shipments to prevent against insect invasion and that particular chemical penetrated the plastic. An extreme case but how many whales are actually contaminated. The only safe way to buy oil is from organic farms who manage their own product. I buy only oil marked with the COOC label. That is the certification sponsored by UC Davis to assure quality.

Since the foundation recommends extra virgin olive oil, it may be of some interest to know what olive oil we personally use.  Our choice is a small California grower