My brain is split, I really hate that

May you live in interesting times

An ironic curse with the clear implication that 'uninteresting times', of peace and tranquillity, are more life-enhancing than interesting ones.  Another cautionary message is 'be careful what  you wish for', and yet another 'fools rush in where wise men never go'.

Cliche man is here apparently, but the old warnings aren't necessarily wrong.  I want to let you know that the foundation has entered an 'interesting time'

We have been greatly honored with support and now it is time for us to stop talking and start dancing.  Intercept Pharmaceuticals has agreed to provide the first funding for our screening program and we plan to open our first pilot facility in Houston in the summer.  For those who have joined us recently, we advocate building 400 screening centers across the US and to screen 1 million people a year who are at risk for liver disease from the large co-morbid (people with multiple diseases) population.

When I think about screening for liver disease I often find that tune from My Fair Lady, "Why Can't A Woman Be More Like A Man" running through my mind.

It is an odd mental tick I suppose. One of my favorite musicals connecting to a potentially terminal illness, but the challenge we face as liver patients would largely vanish if only a liver was more like a breast.

OK, I stretch the analogy a bit here but consider how cancer is managed.  We search diligently for cancer and while there are significant differences between cirrhosis and breast cancer the statistics are interesting. There are around 40,000 deaths annually from each disease, but we search out the tiniest incidence of breast cancer that we can find and manage it aggressively but we ignore liver disease until it presents serious symptoms.  Think about that for just a moment.  Why would we test breasts regularly but intentionally ignore early liver disease?

What if you had a liver disease but no one told you until it is too late? Would you care?

Typically, nonalcoholic fatty liver disease (NAFLD) and nonalcoholic steatohepatitis (NASH) are silent diseases.  They have no symptoms. Even if cirrhosis has developed, there are often no symptoms until the liver has become so damaged that the only option is a liver transplant.
There is currently a quick, easy and economical method to screen for fatty liver disease called a FibroScan.  Unfortunately, the current medical standards policy is not to screen for liver disease.  And, unless you are sick and have symptoms, insurance probably won't pay for the scan, even if you're lucky enough to have a testing system in your area. 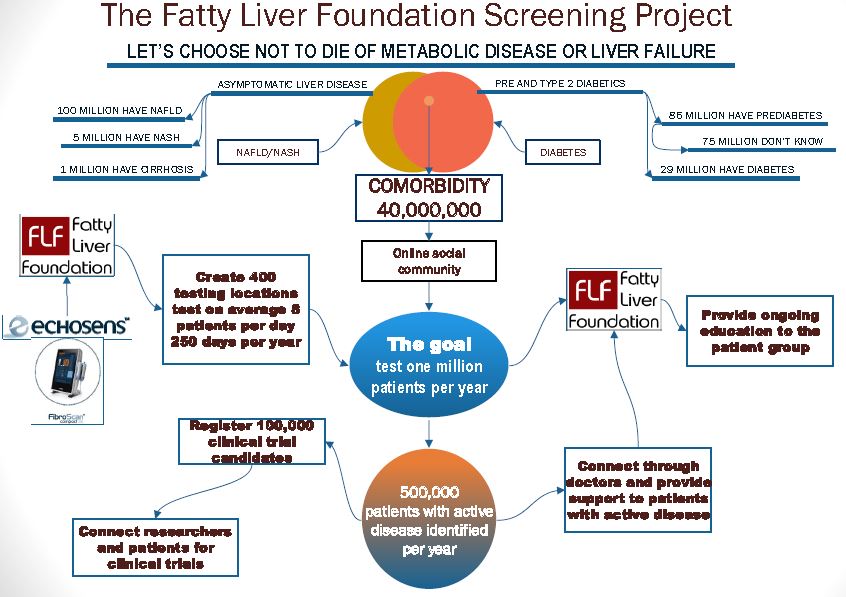 Click here to learn about getting a free FibroScan

We support screening for liver disease before you get sick 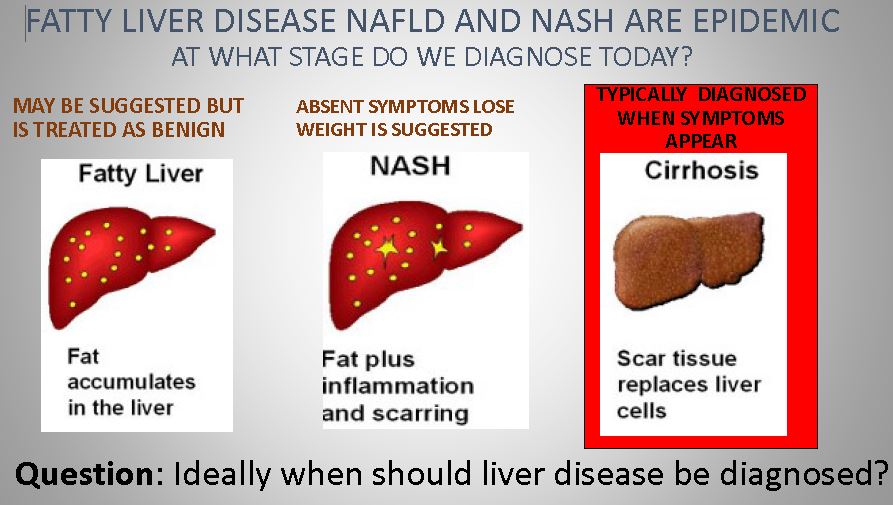 Click on this link to learn about our solution

to the problem of undiagnosed liver disease

CLICK HERE FOR A SHORT VIDEO ABOUT WHY YOU SHOULD CARE

Let's All Ride on the Triglyceride!

If you are here, you or someone you care about, is obese, has or is at risk for liver disease. You won’t care about this topic except as a health issue. This is what you will find here:

Frequent medical advice is to change your lifestyle and diet. Generally this is unsuccessful and there are endless marketers trying to sell you products that will fix you. The purpose of this material is to help you understand how your body actually works. If you understand yourself from a bio-chemistry point of view you might have a chance to judge the value of what folks are trying to sell you. Your life really is a bio-chemical process so the smart thing is to have it work as well as it can. Since you are looking for this information, it may be that you haven’t always been the best steward of your body.

This chapter of Let Me Splain You will look at the role that fats play in the body. They are common in the foods that we eat because life is carbon based and fats are simply chains of carbon atoms of various lengths. Carbon is the most chemically flexible atom so your body has evolved to manipulate a wide variety of arrangements of carbon and your liver is central to the process.

Here we will look specifically at the family of fats that we call triglycerides as they are the most important to your well being because they are the building blocks for cells and the carriers of the energy that powers your life. We will explain how the digestion of triglycerides is unusual and how the fatty acids that are the actual fats themselves work in the body. It is also interesting to note that those fatty acids come in many lengths and how they function in the body depends upon the details of what that means chemically and how those details are important to you being able to live.
So for all adventurous souls, come aboard and 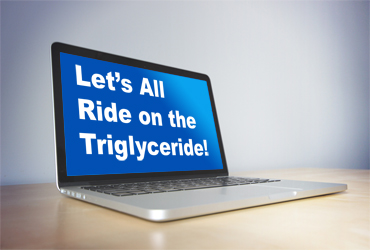 Let's All Ride on the TRIGLYCERIDE!

When your liver is compromised by NASH, make it work less.

We start with the fact that the fundamental problem is the bio-chemical flow between the liver and fat cells. When diet is poorly balanced, over time fat accumulates in the liver and by itself is rather benign but when other chemistries like insulin management begin to degrade you get inflammation which leads to fibrosis and if not stopped progresses to cirrhosis. Since there is no treatment your tool is diet and the question is to avoid anything that stresses the liver and load up on anything that is protective. Easy peasy right. Well let's take a look

Oh my god. That is a terrible list. Not possible to live that way. OK, take a breath. The goal is to take as much pressure off the liver as possible, provide molecules from your diet that are protective and don't stimulate the stellate cells to initiate scaring, but still provide proper nutrition. So what do you do?

You get the idea. you might call this a type of Mediterranean diet but the excess olive oil is specifically a medicine. The rest is mostly nutrition. The fish oil is to get a significant source of omega 3 oil to balance the omega 6 you routinely get in food. The salt limitation is good for you and lowers your blood pressure. The BCAA is a branched chain amino acid mix which is basically predigested protein and helps prevent muscle wasting if your digestion is damaged.

So why should you think this might work for you? Without getting too technical your energy systems are built around triglycerides. Any oil can be used by the body to make them but if made with unsaturated oil they are better for the body. More importantly olive oil is mostly an omega 9 fatty acid. Good olive oil is a complex mixture of around 30 oils and phyto chemicals which support liver function and soothe activated stellate cells which cools inflammation. Good olive oil causes a burning feeling at the back of your throat. Those are the phyto chemicals and more is better if you ever go to an oil tasting bar.  The omega 3 reduces the amount of inflammation caused by omega 6 and is required for good health even if you don't have liver disease.

Click here for a more general discussion about diets.

If you are interested in the science of liver disease here is a link to our educational videos.

DISCLAIMER: Be aware that I am not a doctor.  I cannot give medical advice.  I am a cirrhosis patient and I have apparently halted the progression of my disease following this strategy. You must not assume that this advice will necessarily apply to your situation and you must work closely with your physicians as your situation is unique to you.

What is fatty liver?

Fatty liver is a reversible condition wherein large vacuoles of triglyceride fat accumulate in liver cells via the process of steatosis (i.e., abnormal retention of lipids within a cell). Despite having multiple causes, fatty liver can be considered a single disease that occurs worldwide in those with excessive alcohol intake and the obese . The condition is also associated with other diseases that influence fat metabolism. When this process of fat metabolism is disrupted, the fat can accumulate in the liver in excessive amounts, thus resulting in a fatty liver. 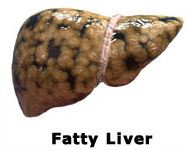 Fatty liver (FL) is commonly associated with alcohol or metabolic syndrome (diabetes, hypertension, obesity, and dyslipidemia), but can also be due to any one of many causes.