How Intermountain Medical Center and Dr. Charlton Saved My Life

There are moments in life that are seared into memory, which you can relive bidden or unbidden. A moment like that for me was the late morning of December 23, 2010. 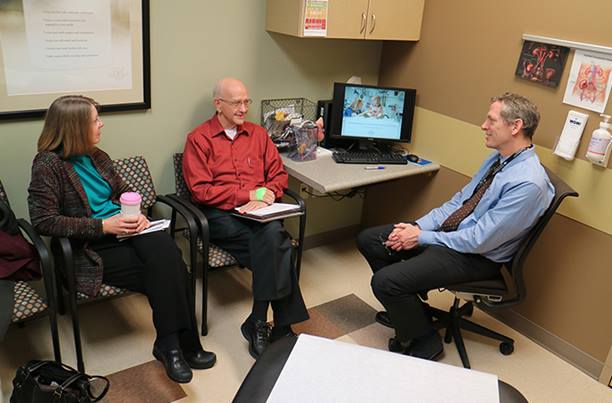 After having my gall bladder removed, I was told I had Stage 4 liver cirrhosis. The doctors showed me a picture of my liver taken by the surgeon and it was clearly in trouble. I was astonished to learn my case was pretty typical.

Cirrhosis, the final stage of liver disease leading to end-stage liver failure, commonly doesn’t have any warning symptoms. I’d believed I was in pretty good health. I’d never had any abnormal liver enzymes in my blood work or other symptoms, but because of that picture I arranged for treatment with a gastroenterologist.

I remember very clearly my doctor’s words: “I’m sorry, but we have nothing to offer. There is no treatment.”

Much of the rest of that discussion is a haze for me, except the vision that my liver was going to kill me. The medical advice was lifestyle change, don’t drink alcohol, lose weight, and exercise.

I’d tried various diets over the years, but always failed or gained back what I’d lost. I was the everyman story of modern American dieting but I thought of myself as okay physically, when in fact I was apparently a slow-motion suicide.

Then the unthinkable happened: my diagnostic toboggan ride to hell began. The pathology report came in and said I did NOT have cirrhosis. Shocker!

In hindsight that was an error. After couple of months of blood tests, my doctor told me my liver was actually fine and my sick gall bladder apparently just made it look bad. What a relief. Much like a death-row reprieve, the disturbing picture hung out there. For the next three years I took the picture with me to every routine doctor visit, but I was repeatedly assured I was in good health.

In 2014 I was due for a colonoscopy and again I took my picture and the doctor did some blood tests. This time my iron was quite high and I was referred to a hematologist. After some more tests I was diagnosed as cirrhotic as a result of hemochromatosis. So, back into liver failure hell. But the good news: It was potentially manageable with phlebotomies, which remove blood from the veins, so over a few months I had seven liters of blood drawn.

In real life I’m an engineer, so over time I came to view the beast in my belly as something to be fought rather than a slow but sure slide into decrepitude and a miserable death. I made it my goal to understand the details. I sought second opinions. I read the research. I took my biopsy slides and got a pathologist to sit at the scope with me and explain the nuances. Eventually, assuming pending liver failure, I got a referral to a transplant center and went through yet another analysis. Wow. Then I was told I didn’t have hemochromatosis at all, but I was a NASH (nonalcoholic steatohepatitis) patient.

Gone was the possibility that I could control my disease with phlebotomies.

I had a really visceral reaction for a time, but I’d seen many stories of other liver patients going through a diagnostic muddle so I was more prepared than many for yet another change.

Michael Charlton, MD, of the Intermountain Medical Center Transplant Center explained the situation to me and arranged for an MRI elastography study, which for the first time gave me a clear understanding of my situation.

Okay, so what to do?  I was surprised when Dr. Charlton outlined a specific diet for me with an emphasis on replacing dietary fats with extra-virgin olive oil and no sugar.  I’d never been told a specific diet could benefit me.  The only advice I’d been given was it would be good to lose some weight, and despite my research the olive oil information was new to me.

I was unsure about the plan but because, for the first time, I understood my situation — thanks to the Intermountain Medical Center team — I resolved to follow those instructions. The result: I’ve lost 45 pounds with a healthier food strategy without feeling hungry or deprived. Learning about vegetables I’d never tried before was an adventure. Never eating juicy steaks, sugary desserts, or other foods I’d loved was a challenge but possible with a clear goal in mind.

I also had a repeat fibroscan to see how I was doing.  Unlike most cirrhosis patients, my score had improved from 21.5 the year before to 14.3. Clearly my liver was improving and my future probably no longer includes the specter of the years-long dying process that awaits so many people with liver disease.

I can’t help but wonder at times if yet another twist might lie ahead. It’s true that many cirrhosis patients are unable to make the lifestyle changes their liver requires, so for many of them the tragedy of liver disease continues. For me, however, thanks to Intermountain Medical Center and Dr. Charlton, while I may not win this game, for now I’m ahead on points.