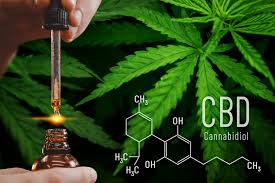 CBD, or cannabidiol, is a non-psychoactive component of the cannabis plant with anti-inflammatory properties.[1]  To ensure avoidance of psychoactive effects, CBD must be extracted from hemp, not traditional marijuana.[2] In recent years, CBD has become a popular supplement. CBD works in the body through the endocannabinoid system, which is highly upregulated during chronic liver disease, affecting multiple steps along the disease’s progression.[3]

Some research has been done concerning the interactions between CBD and liver disease, with mixed but promising results. The first thing to understand about CBD is that there are two important related receptors in our bodies, called CB1 and CB2. As noted in a 2008 study, cannabinoid receptors (CB1 and CB2) and their binding molecules (endocannabinoids) have emerged as novel mediators of liver diseases. While activation of CB1 receptors can contribute to NAFLD and fibrosis, activation of CB2 receptors have been characterized as antifibrogenic and regulators of inflammation.[4] With this understanding, it makes sense that inhibiting CB1 receptors has been shown to inhibit the progression of fibrosis, while activating CB2 receptors has been shown to inhibit growth and cause cell death for cultured liver fibrogenic cells. Because CB1 and CB2 receptors exert opposite effects on liver fibrosis, evaluating the net impact of using endocannabinoid signaling on liver fibrosis in a clinical setting is complicated and far from clear cut.[5] 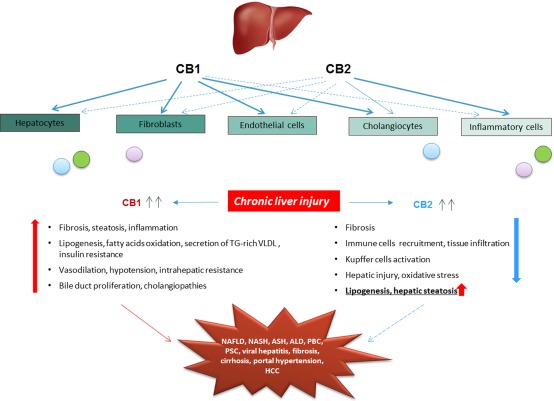 In animal tests, the relationship between CB1 receptors and fatty liver (both diet-induced and obesity-associated) has been made clear. Research has shown that high-fat diets induce fatty liver via activation of CB1 receptors, which are necessary for the development of diet-induced steatosis, dyslipidemia, and insulin resistance.[7] Studies with obese rats have shown that the administration of CB1 inhibitors reduced obesity-associated hepatic steatosis and certain features of metabolic syndrome.[8] The drug Rimonabant was the first selective CB1 inhibitor used in clinical practice after clinical trials showed its benefit on weight reduction, abdominal obesity, liver steatosis, and other cardiometabolic syndromes.[9] Though this may seem like good news, it is important to note the increased appearance of psychiatric disorders including depression, anxiety, irritability, and aggression.[10] Consequently, the FDA never approved Rimonabant for the treatment of obesity.

While we have lots of research on CB1 receptors and fatty liver, investigations regarding the role of CB2 receptors in this disease area are minimal. In human studies, liver samples from patients with steatosis and steatohepatitis have expressed CB2 receptors, while liver samples from normal livers showed no CB2 receptor expression.[11] In fibrogenesis, CB2 activation has exhibited some evidence of an anti-fibrogenic role.[12] In rats, studies have shown that activating CB2 receptors in the liver significantly reduced collagen content in rats with pre-existing cirrhosis and improved regenerative response to acute liver injury.[13] It is important to note that other studies have shown conflicting results regarding CB2 and NAFLD.[14]

While you should always consult with your doctor before starting to use any supplement, CBD has some special considerations. If you decide to take it even though the jury is still out on the effects of CB1 and CBD on NAFLD, please be cautious of the following things:

Gabriella Wan is a Program Coordinator at the Fatty Liver Foundation with a background in public health. She is passionate about improving quality of life through lifestyle change, awareness raising, and education.

[9] Christopoulou, FD and Kiortsis DN, An overview of the metabolic effects of rimonabant in randomized controlled trials: Potential for other cannabinoid 1 receptor blockers in obesity, Journal of Clinical Pharmacy and Therapeutics, February 2011, doi: 10.1111/j.1365-2710.2010.01164.x

[15] Curley, Christopher, Worried About CBD Hurting Your Liver? Here’s What the Experts Have to Say, healthline.com Health News, August 2019, https://www.healthline.com/health-news/can-cbd-hurt-your-liver-what-to-know-about-a-new-study?c=672391731507