Health in the land of unintended consequences 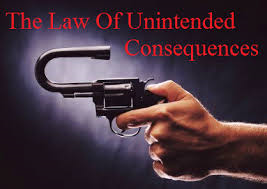 It is said that death and taxes are the only constants but we should include the Law Of Unintended Consequences as a universal truth.  For patients this is particularly true.  We want to be well but every decision carries the potential for things we didn't expect.

How bad is it? It has been projected that today's children will be the first generation in history to have a shorter life span than their parents. Even with the rapid advancement of medicine the society is becoming less well and chronic disease in many forms is epidemic. Even if we live longer, the end of life when we suffer and die slowly and painfully is getting longer for many.  Not the ideal trade off perhaps.

Only people who care about living longer and better lives pay any attention to my musing in these articles, but many of you are advocates for a lot of different supplements.  The promises of miracle foods and miracle cleanses are everywhere and the supplement industry is huge.  When you consider supplements remember to consider unintended consequences.

An example might help you understand the problem better.  Do you know about sodium fluoride? They put it in toothpaste to prevent cavities. That seems like a good thing, no one wants tooth decay. Modern chemistry has brought us tens of thousands of molecules that have made our lives better. They do, of course, enter our bodies where one tentacle of the Law of Unintended Consequences lives.

Consider for a moment your "mast" cells, these are specialized white blood cells that are a critical part of your immune system and are mainly found in tissues. Mast cells are part of the very complex system that protects you against infections and they are part of initiating the inflammation and repair functions associated with injury.  Like so many things, inflammation is good, until it isn't. It is a critical part of protecting tissues unless it becomes chronic which often then leads to organ damage.

So what could tooth enamel have to do with the immune system? This is a fascinating example of unintended consequences. The dentists certainly had no interest in any result but better teeth. It turns out that sodium fluoride affects the operation of mast cells.  This matters because allergic reactions and inflammatory processes are significantly managed by mast cells.  You want your immune system to be vigilant but to sit quietly absent a foreign invader.  When a mast cell is modified by a molecule of sodium fluoride it becomes "primed" to act but still sits quietly. If a molecule of calcium interacts with the cell it triggers the release of histamines and other inflammatory elements. So think about that. Brushing your teeth can increase inflammation throughout the body that is probably not beneficial to you.

Well, I don't swallow toothpaste you might say.  Perhaps, but is that true of your 5 year old?  Chronic inflammatory disease is a serious health problem.  Our specific community of liver disease patients suffering from cellular damage and chronic inflammation is perhaps affected by sodium fluoride. We don't really know, but the concept that seemingly unrelated processes can be changed by novel chemicals should give you pause when you consider supplementation.

In health, the Law of Unintended Consequences is alive and well and is just one of the reasons you should be your own advocate and learn all you can and question everything. Medical error and negative drug reactions kill over 250,000 people a year and the number of private deaths, which are essentially accidental suicide, are unknown but no doubt higher.  When you undertake novel treatments for serious disease you are inviting a dance with the keeper of the Law of Unintended Consequences.