The medical society that guides the treatment of patients is the American Association for the Study of Liver Disease (AASLD) their annual meeting is this week and it is virtual with a lot of first time patient access.  This is the first time patients have been welcomed so if the state of the art of liver research interests you, here is a link. Join Us!

I am particularly excited by an event that has generally gone unrecognized but it is tremendously important to the patient community. They just don't know it yet.

Madrigal Pharmaceuticals is a small drug developer. They have been quietly doing their work while the pharmaceutical giants get most of the attention.  They have been allowed by the FDA to conduct a phase 3 trial of their drug Resmetirom, called Maestro-NAFLD, without requiring a biopsy.

Clinical trial recruitment for liver studies has been very difficult. No one wants that giant biopsy needle. We do it when we are very ill because we are desperate but for the many millions of people with advancing disease but no symptoms, it is a tough choice.  For us to make better progress to useful therapies we need to be able to do trials using non-invasive testing.

Madrigal has opened the door and we look forward to their trial.  Even if Resmetirom isn't successful the fact that they have been able to do it non-invasively is a big step forward.

The enabling technology is the development of a variety of non-invasive tools.  The most widely used is the Echosens FibroScan. If you have been with us for a while you know that we used a portable Fibroscan in our SUNN Study.

In the MRI world a couple of leading tools are Magnetic Resonance Elastography (MRE) and Proton Density Fat Fraction (PDFF). An important new tool from Perspectum, LiverMultiScan has been available in Europe for some time and is making inroads in the US. These tools are mostly used for research or in late stage clinical disease settings but even more interesting for patients is the development of blood based screening.

There are a number of firms working to develop effective tests for liver disease based on blood and the field is moving quickly as we learn the details of how this panoply of liver diseases affects blood based markers. This will be the basis for population based screening for asymptomatic disease that affects so many of us. The 20 million people who are estimated to have NASH but don't know it will benefit greatly by learning about their condition before they become sick and have an opportunity to manage the condition and avoid illness.

One of the recent tests to be announced is from Genfit Pharmaceuticals and is called NIS-4. Another suite of tests is now being offered by Fibronostics which looks at the components of NASH such as inflammation, fibrosis, and fat.  In a recent email I told you about my personal experience with the new test called LIVERFASt which worked well for me.

They also have a lower lever screener which I think is quite interesting. It uses recent research and applies generally available blood results to estimate disease risk.  It isn't meant to be diagnostic, but provides a nice visual comparison of the estimated risk of diabetes, coronary heart disease, stroke, and fatty liver.  I find this to be a very nice summary and a cheap early screener that can help us understand the issues that we are dealing with in our health care.  This is my personal report. 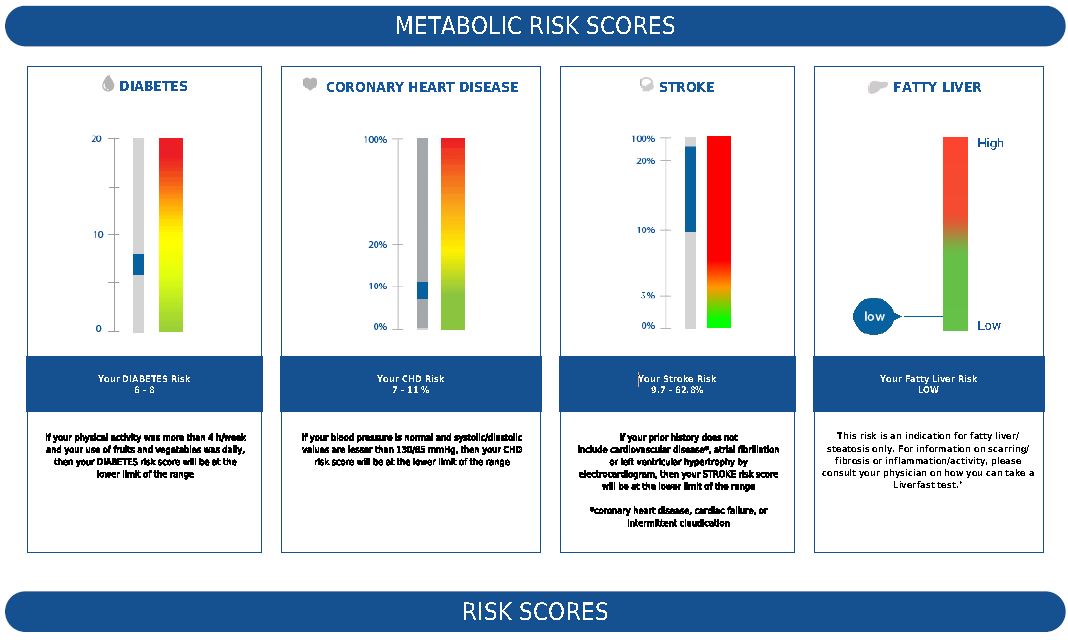 Future articles will explore various tools in more depth.  I personally plan to use these tools to monitor my own progress in the future which is something we really haven't been able to do easily. The coming availability of useful blood markers that can be used to monitor progress and help us understand how our body is really doing is one of the most exciting things coming out of research this year.